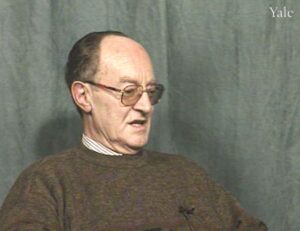 Benjamin Silberberg was born in Longwy, France in 1924 to Polish immigrants. He recounts their move to Charleroi when he was six months old; his brother's birth; his father's socialist activities causing them to move frequently; living in Gilly; attending secular school and a weekly Jewish religious school; participating in socialist youth movements; his father's participation in the Spanish Civil War; their move to Brussels in 1939; German invasion; fleeing with his family to France; his father's enlistment in the Polish military; assistance from the Red Cross; incarceration with his mother and brother in Récébédou; returning alone with a family friend to Brussels; learning all their possessions had been stolen; rejoining his mother and brother in Rivesaltes, then his father in Caylus; working with him in Berbiguières; his mother and brother joining them; arrest three weeks later in August 1942; transfer with his father and brother to Saint-Pardoux-la-Rivière, then to Drancy; their deportation to Auschwitz/Birkenau on September 4; slave labor doing construction; volunteering for transfer, thinking it could not be worse elsewhere; slave labor building a factory in Laurahütte; his privileged position providing extra food; sharing it with his father and brother; hospitalization; and a prisoner-doctor allowing him to remain for a week's rest.