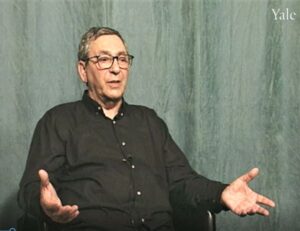 Jacques Sephiha was born in Brussels, Belgium in 1925 to Turkish parents, one of six children. He recounts speaking Ladino at home; tensions between Ashkenazi and Sephardic Jews; participating in a Zionist group with his brother Haim; German invasion; two brothers briefly fleeing to France; exemption from anti-Jewish restrictions as Turkish citizens; working with the resistance group Mouvement National Beige, hiding Jewish families and distributing underground newspapers and false papers; several arrests, then release as a Turkish citizen until 1943; his brother Haim's arrest, then his a month later; deportation to Malines, then with his father to Buchenwald; slave labor in a quarry; protecting his father from the heaviest work; being advised to volunteer as masons; solidarity among communist prisoners who ran the camp benefiting him and his father; frequent public hangings; non-Jewish prisoners sharing Red Cross packages with the Jews; hiding to avoid transfer; a death march then train transport to Dachau; liberation on April 29, 1945, the day after their arrival; many deaths from eating; hospitalization for typhus; convalescing in Reichenau and Davos; returning to Brussels; learning his father had died; reunion with his brothers, then with his mother and sisters after their return from Turkey; joining a hachshara; traveling to Lyon and La Ciotat with his group; illegal emigration to Palestine; interdiction by the British; incarceration in Famagusta, Cyprus; release; living on a kibbutz; finding no one was interested in his experiences; visiting his mother before her death in 1950; returning to Belgium in 1951; marriage; several different careers; helping Algerian emigres; and becoming a Belgian citizen. Mr. S. discusses bonding with his father in Buchenwald; the camp hierarchy; and his determination to adapt to camp life.