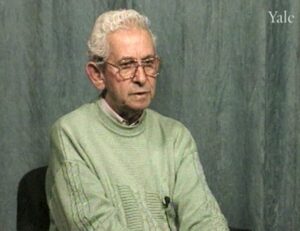 Benzyon WALZER was born in Sieniawa, Poland in 1928, the youngest of three brothers. He recounts his family's orthodoxy; antisemitic harassment; participating in a Zionist youth movement; moving with his family to Jumet in 1936; attending a public school and cheder; German invasion; briefly fleeing to France; anti-Jewish restrictions; his bar mitzvah at home since the synagogue had been closed; his father and brothers volunteering for forced labor in 1942, hoping to save him and his mother (he never saw them again); he and his mother hiding wiith non-Jews in early 1943; buying tobacco in Gilly for his host; returning home; arrest when he was out of the house (his mother went into hiding); imprisonment in Charleroi, then Malines; deportation to Auschwitz/Birkenau; selection to work in Monowitz; several slave labor assignments; taking clothing from a kapo to trade with Polish civilians for food; brief hospitalization; public executions; a death march to Gleiwitz; escape from a train during an Allied bombing; recapture; arrival at Oranienburg; a march to Flossenbürg; sneaking out of a group selected for execution; a privileged assignment washing windows; a death march; abandonment by German guards; receiving food from a German farmer; liberation by United States troops; assistance from the Red Cross; repatriation; beating the man with whom he traveled after learning he was a collaborator; reunion with his mother; assistance from the Joint; marriage in 1956; the births of his children; and moving to Israel in 1980 after his mother's death. Mr. W. discusses numbing himself in the camps, focusing only on his own survival; camp hierarchies; relations between national groups; pervasive painful memories and nightmares; not sharing his story with his wife and children until recently; writing a book; and attributing his survival to luck.