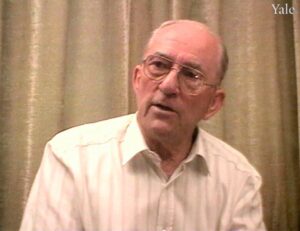 Alfred Cornut was born in Ciply, Belgium in 1921, the oldest of three children. He recounts attending school in Mons; working as a butcher to support his family; German invasion; fleeing to Marseille; returning home; working at a slaughterhouse in La Louviere; his father's death in December 1940; hiding with friends in Frameries to avoid compulsory labor; arrest; imprisonment in Mons; transfer to Watten; slave labor for Organization Todt; escape; returning home; hiding in Brussels; joining the underground; obtaining false papers; living in Braine-le-Comte; destroying trains, power plants, and executing collaborators; arrest; incarceration in St. Gilles; interrogation and torture; deportation to Neuengamme in August 1944; transfer to Deutsche Werft, Hamburg; volunteering to join a friend who was a welder; a beating and transfer to a live bomb removal unit after it was recognized he did not know how to weld; reassignment peeling potatoes and sharing peels with friends; French prisoners of war leaving extra food; being wounded in a bombing; hospitalization in Neuengamme; transfer to Sandbostel; liberation by British troops; repatriation with assistance from the Red Cross; marriage; and divorce. Mr. C. discusses constant terror in the camps; identifying collaborators after the war; visiting Neuengamme and Sandbostel; sharing his experiences with his children; speaking at schools; and attributing his survival to luck and help from friends.