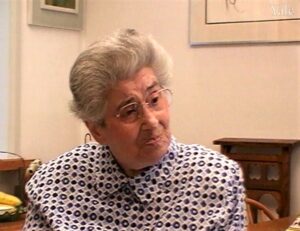 Buntea Crupnic was born in Soroca, Russia (presently Moldova) in 1911, one of five children. She recounts fleeing a pogrom with her family when she was six; Romanian occupation after World War I; one brother moving to the Soviet Union; her arrest at sixteen for communist associations; her father obtaining her release through a bribe; expulsion from school; emigration to Brussels in 1928; her brother's emigration to Palestine in 1929; visiting her parents for two weeks prior to their emigration to Palestine in 1934; attending university and working in factory; participating in a communist student association; marriage to a friend in name only to become a citizen; German invasion; operating a clandestine radio station and newspaper; arrest as a Resistant in April 1944; interrogation and torture in Avenue Louise; transfer to Malines, back to Avenue Louise, then St. Gilles; deportation to Ravensbrück as a political prisoner two months later (they never learned she was Jewish); slave labor in a uniform factory; sharing Red Cross packages with fellow prisoners; transfer to a Berlin prison three months later, then days later to Auschwitz/Birkenau; placement in a barrack with other Belgian political prisoners; slave labor in a factory; a German communist having her assigned to a privileged hospital job; public hangings; a death march to Ravensbrück in January 1945; transfer to Sweden by the Red Cross in April; repatriation to Uccle; learning her legal husband had not survived; and marriage to a survivor. Ms. C. discusses prisoner hierarchies and intergroup relations in the camps; attributing her survival to help from others and never being identified as a Jew; her long recuperation; and social and emotional difficulties resulting from her experiences.