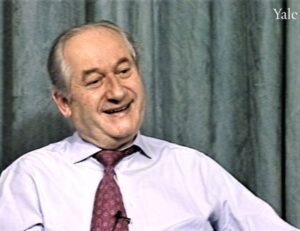 Israel Rosengarten, who was born in Rzeszów, Poland in 1926, the younger of two brothers. He recounts his family's 1929 emigration to Antwerp to join relatives; their orthodoxy; attending Agudat Israel on weekends; the births of two younger siblings; attending a commercial school in Berchem; German invasion; fleeing with his family to Brussels via Ostende, then to De Panne and Adinkerke, intending to leave for France; not being able to cross the border because they were Polish citizens; traveling to Eeko, Bruges, then Ghent; working in Brussels; anti-Jewish restrictions; visiting his father in Alken, then his brother in Charleroi; arrest on his trip home; incarceration in Breendonk, then Malines; deportation to Sakrau; deciding upon arrival to go with the men, not the children; observing Rosh ha-Shanah with other prisoners; transfer to Laurahütte; slave labor; transfer to Königshütte and Bismarckhütte; hospitalization; transfer to Blechhammer; a variety of labor assignments; friendships resulting in partnering to obtain extra rations; working next to British prisoners of war, one of whom gave him a sweater; Czechs warning them of SS presence; deteriorating conditions when the camp administration was transferred to Auschwitz; deep distress resulting from his best friend's death; a public hanging; a death march in January 1945; French and British POWs encouraging them and sharing their food; arrival at Gross-Rosen; train transport to Buchenwald; liberation by United States troops; repatriation to Brussels via Namur; learning his father and brother had not survived (he knew his mother and younger siblings were killed); living with an aunt; brief emigration to the United States; and learning to be a diamond cutter. Mr. R. discusses many details of camp hierarchy and life; sharing his story with his son, while not dwelling on it; writing a book about his experiences; and attributing his survival to luck.