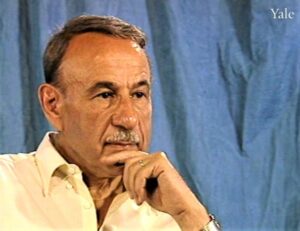 Jakub Rotenbach, who was born in 1926 in Łódź, Poland. He describes his father's active participation in the Bund; good personal relations with Germans and Poles despite public, antisemitic incidents; German invasion in September 1939; synagogue burnings and round-ups; formation of the Judenrat headed by Mordecai Rumkowski; ghettoization in spring 1940; belonging to a group which tried to sabotage work done for Germans; his father's death; relationships between national groups; hiding during round-ups; deportation with his family to Birkenau as part of a Siemens factory; seeing prisoners pray on Yom Kippur; obtaining extra food from a prisoner in Canada Kommando; bringing food and clothing to his mother and sister (they did not survive); transfer with his brother to Lieberose in October 1944; help from German political prisoners after a severe beating; his brother's transfer (he never saw him again); a death march to Sachsenhausen; transfer to Mauthausen, then Gusen; and liberation by United States troops. Mr R. discusses the importance of hope, luck, and sociability to his survival; relations between ethnic and political groups in the ghetto and camps; and his overwhelming sadness at liberation upon realizing he was alone.